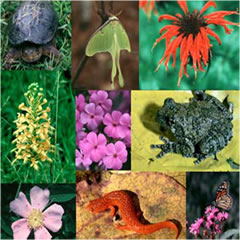 Biodiversity is a neologism derived from the words bio and diversity.

To date there is no standard, universally accepted definition of biodiversity.

In the broadest sense, biodiversity means the variability of a comprehensive life: plants, animals, fungi and microorganisms.

Under the Convention on Biological Diversity  (CDB - Convention on Biological Diversity), the adopted at the UN Conference on Environment and Development (UNCED) in Rio de Janeiro in 1992. years, biodiversity has been defined as "the variability among living organisms, including, inter alia, terrestrial, marine and other aquatic ecosystems of which they are part: this includes diversity within species, between species and of ecosystems".

In any case, biodiversity, or "biological diversity" means the totality of genes, species and ecosystems on Earth. This term includes three levels of organizational diversity međuuslovljena:

Interdependence of these levels is the obvious: genetic diversity is contained in the individual and populations of species participating in the types of species diversity, stepping in complex ecological interactions in building various kinds of ecosystems. 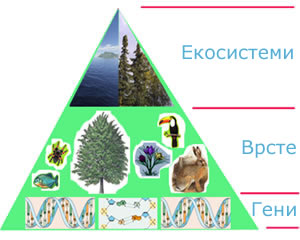 So far, described and classified between 1.5 and 1.75 million of organic species on Earth (and LeCointre GUYADER 2001, Cracraft 2002). Scientists suspect that this number represents only a small part of the total number of species on the planet. Estimates of total number of species range from 3.6 to 80, including over 100 million, but more realistic estimates suggest the existence of 13 to 20 million species on Earth (Hammond 1995, Cracraft 2002).

Species are not evenly distributed on Earth. Ecosystem diversity is dependent on the physical properties of the environment, diversity of species and interactions between species, and species interactions with the environment. There are very complex ecosystems with many species, such as tropical rain forests and coral reefs, but also simple ecosystems such as arid (warm) and frigorifilne (cold) desert, with a very small number of species. Generally, warm and humid environment with long days (such as tropical rain forests) provide a living world more resources for growth and reproduction. Favourable conditions for growth and proliferation of primary producers (plants) leads to the appearance of a large number herbivornih species (herbivores), and this in turn results in the presence of a predator or karnivora. In cold ecosystems, the development of primary producers is limited by seasonal changes in temperature and day length, and in their diversity of flora and fauna is always lower than in the warm tropical ecosystems.

The demographic explosion, and with it the growing needs of the population, led to a rapid increase in use of natural resources, and therefore alarming threat to natural habitats and wildlife in them

The main factors are changes compromising biodiversity and habitat fragmentation, over-exploitation of resources, different types of pollution, as well as settlement and invasive non-indigenous species.

One current example of a massive spread of the invasive species Ambrosia artemisiifolia. In recent years in many countries, and in our intensive work on monitoring and combating the spread of this highly allergenic species.

The main objective of conservation biology is the preservation and protection of biodiversity on the planet. General standards for the assessment of biodiversity based on the criteria for determining the type of vulnerability of the International Union for Conservation of Nature (Red List and Red Data Book of IUCN), important botanical area (IPA), significant ornithological habitats (IBA) and the categorization of habitats (CORINE and NATURA 2000).

Cracraft, C. (2002). The seven great questions of systematic biology: an essential foundation for conservation and the sustainable use of biodiversity. Annals of the Missouri Botanical Garden, 89, 127-144.

These items will be permanently deleted and may not be recovered. Are you sure?